The Higher Ones involved with I. 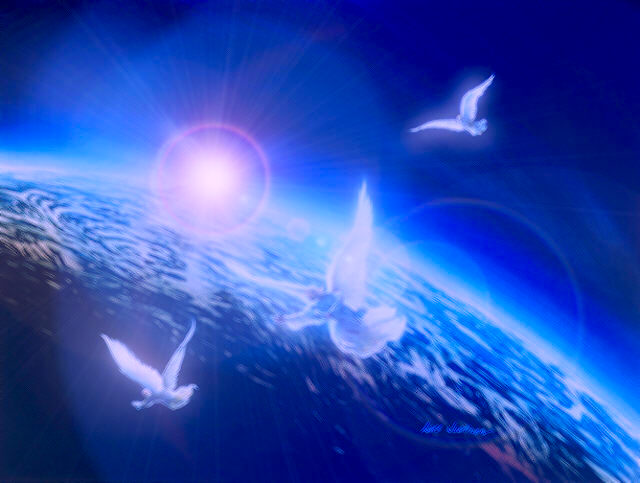 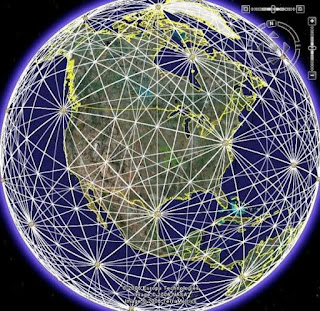 All of the ancient world and most of the Founding fathers when they came to America used long forgotten technology and knowledge passed down to the Protection groups over the years "Freemasons,Illuminati and most occult and Religions" use whats called Sacred geometry for building and building upon in locations for Higher Purposes.These geometric grid patterns lay all over the earth in lines and whats known as Ley lines or a form of  "Feng Shui"
which flow in the flower of life pattern for A energy field  "Chi" and "And feeling of greatness" Every large city in America was built on these including Watertown,NY .

Watertown and the surrounding area had a very ancient past that's not well knowned, Many megalithic/ Neolithic structures were located on Dry hill and the surrounding areas. These Ley line markers are actually place markers of the last Great Event  "Galactic Center" some almost 13,000 years ago.
These ley line structures are all around  and effect the Earths Vibrational frequency in that specific area, this effects everything from Environmental factors from health to even plate tectonics.

The Ancient Mounds that are located on the path of dry hill from Rutland to Rodman. 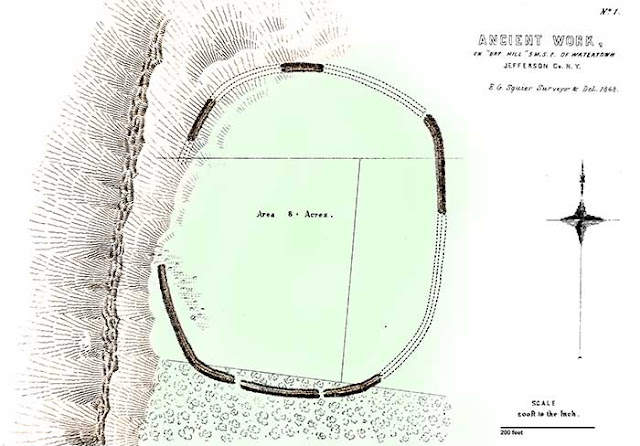 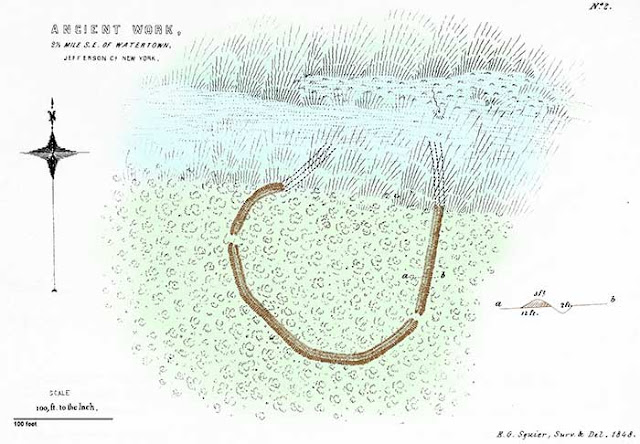 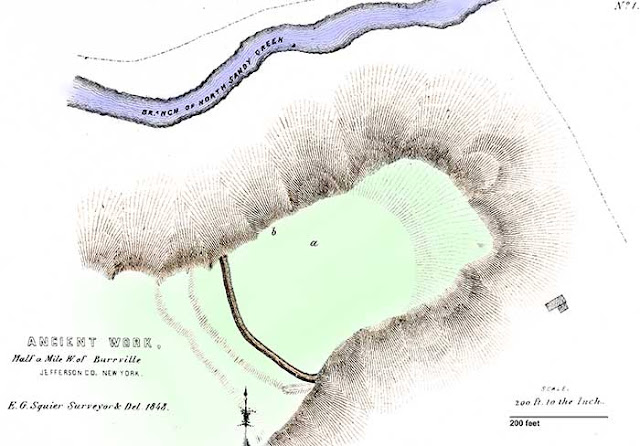 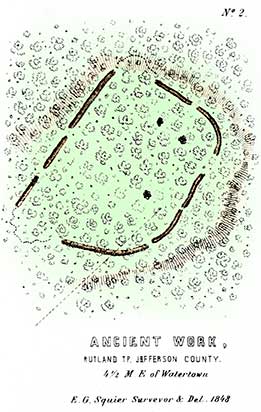 Information on the ancient structures
http://history.rays-place.com/ny/rodman-ny.htm


More On ancient Mounds only found in this area of Northern NY, "DryHill Area"
http://scienceviews.com/squier/aboriginalmonumentstitle.html 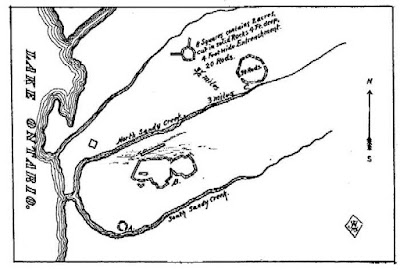 In Rodman are still discernible traces of the Indian occupation. Near the residence of Edward Dillon (formerly Jared Freeman, and so marked on the accompanying diagram) is an interesting aboriginal work. It is located on lot No. 1, on the farm of the late Royal Fuller, in a gently sloping field near a small tributary of Stony creek. A plan of this work was made in 1850 under the direction of Mr. Freeman, who was familiar with it when every part was distinctly visible, and the following description was then made: It consists of a double bank, with an intervening crescent-shaped space, and a short bank running down to the stream. The latter may have been the remains of a beaver dam, or a covered way to the water. Beaver dams were common on the stream, but this had not their general appearance. Within the enclosure there was plowed up a large quantity of corn, which was found scattered over an area of about one rod by eight rods. It appeared as if charred by fire or exposure to the elements. This spot must have been an immense cache, or place for concealing corn. In all several hundred bushels were revealed by the plow. Charred corn was not found elsewhere, though adjoining fields furnished large quantities of stoneware and earthenware fragments. Just inside the enclosure is a large bowider of gneiss rock, in which may be seen two or three broad yet shallow depressions, doubtless worn by grinding stone implements. These smooth depressions were twelve inches across, and from one to two inches deep. No other part of the mass presented a like smooth surface. Directly upon the mound stood a pine stump three feet in diameter.

Near the north-west corner of Rodman, on lot number two, on the farm of Jared Freeman, was formerly an interesting work, of which no trace remains, except a boulder of gneiss, worn smooth by grinding. Before the place had been cultivated, it is said to have shown an oval double bank, with an intervening crescent-shaped space, and a short bank running down a gentle slope to a small stream, on of the sources of Stony Creek, that flows near. Several hundred bushels of burnt corn were turned out, over an area one rod by eight, showing that this must have been an immense magazine of food. On the farm of Jacob Heath, on lot No. 25, near the west line of Rodman, and on the north bank of North Sandy Creek, a short distance above the confluence of the two main branches of that stream, there formerly existed an enclosure of the same class. It included about three acres, was overgrown with heavy timber, and furnished within and without, when plowed, a great quantity and variety of terra cotta, in fragments, but not metallic relics. Under the roots of a large maple was dug up the bones of a man of great stature, and furnished with entire rows of double teeth.

http://stevequayle.com/Giants/N.Am/NewYork.land.of.giants.html
Watertown,NY many years ago here some links.
Giants here In Watertown area ,From Rutland, NY to Rodman .
One Major characteristic of Giant is double row teeth and these remains did have that and tremendous proportions.


And here is a new article I found on the same very subject of Giants in Conneaut which is NYC -BOSTON area ,remember they were everywheres back then 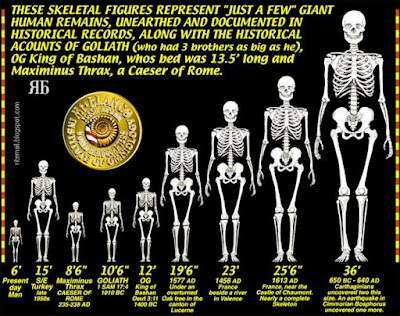 Other Accounts
Achilles In the Homers Illiad  puts him at 33 ft . "Think about the keel area that was taken out to take the giant down"
This is why he took out dozens at a time,and his connection to the Gods-Offspring.

The Bible calls them Nephilim ,Rephaim,Gibborim
From all ancient Accounts - Greeks,Hindui,Roman,Norse,Eqyptian,Sumerian,Chinese.
Around the world ,we now call legends and Myths which are real accounts.
More Articles /Links
More On Giants
This explains the ancients of USA

A must listen audio .
There’s something about the pre-history of North America that’s been suppressed, hidden, kept from curious minds. A history that maybe lingers in our own DNA of which some will have glimpsed intuitively; scenes from the true nature of our history.  In Dr. Ross Hamilton’s book a Tradition of Giants, he writes extensively about the archaeological evidence of very large and powerful people far more robust and tireless than today.  Despite social and political upheaval altering the legacy of native American oral history, their tradition narrates the existence of very tall, impressively constructed men and women whose lives and deeds became legendary.
It is said to be a royal class descended from an ancient clan of immortal stock, such as the Cherokee Nunnehi or the Choctaw Nahulo.  Dr. Ross Hamilton who’s book A Tradition of Giants has an alternative title The Elite Social Hierarchy of American Prehistory. We talk more about the book and research with author and historian Ross Hamilton.  Ross Hamilton’s new book  Star Mounds: Legacy of a Native American Mystery will be available soon.

More Giants
Heres Two Last Links For Giants.
These are both amazing for articles,research,and other information

GIANTS IN THE EARTH
http://mysteriousworld.com/Journal/2003/Spring/Giants/ 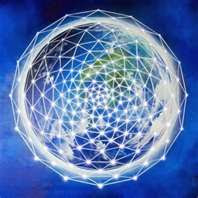 Ley lines are alleged alignments in a number of places with geographical and historical interest, such as ancient monuments and megaliths, natural ridge-tops and water-fords. Their existence was suggested in 1921 by the amateur archaeologist Alfred Watkins, in his books Early British Trackways and The Old Straight Track, commenting "I knew nothing on June 30th last of what I now communicate, and had no theories".[1] Watkins later developed theories that these alignments were created for ease of overland trekking by line of sight navigation during neolithic times and had persisted in the landscape over millennia.[2] In more recent times, the term ley lines has come to be associated with spiritual and mystical theories about land forms, including Chinese feng shui.[3]

Because of the Position and flow and how this follows Structure known in the universe as consciousness that does underline and is within everything in the cosmos, these in return follow mathematical and sacred equations that flows the Energies of the Creator "God" In forever in a Positive Light . While on the other end of this circuit of the cosmos would be Negative.  These are the two different aspects in our Reality needed as Mechanical to make everything work.
http://www.ancient-wisdom.co.uk/leylines.htm

This is the ancient ley line that starts from Long Island Montauk and runs all the way up to Jefferson county NY and even further onwards. 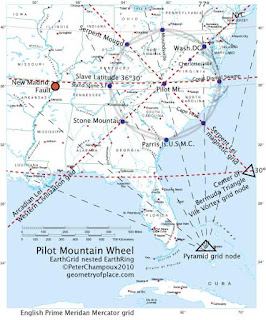 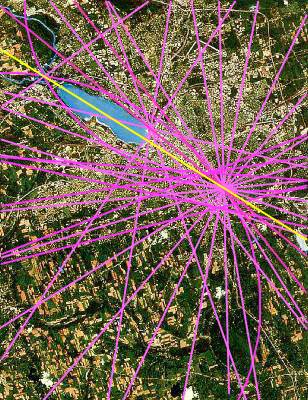 
Ley lines flow in a pattern known in sacred geometry is the flower of life.

10 Major Vorticies of the World. 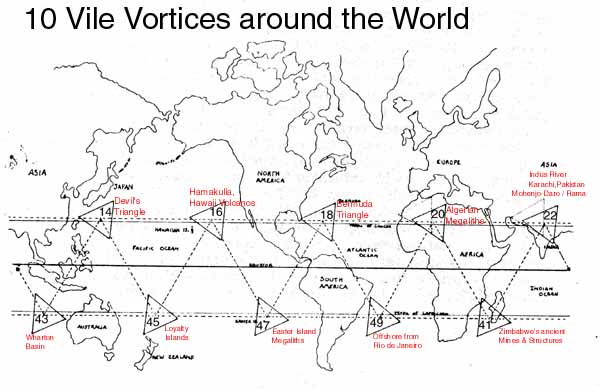 Another Map of the Vorticies of the World 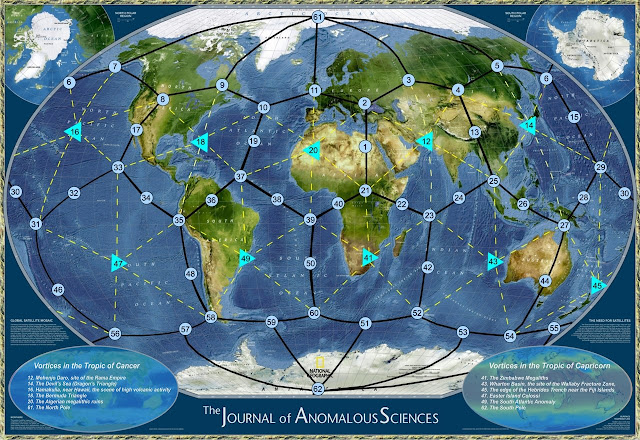 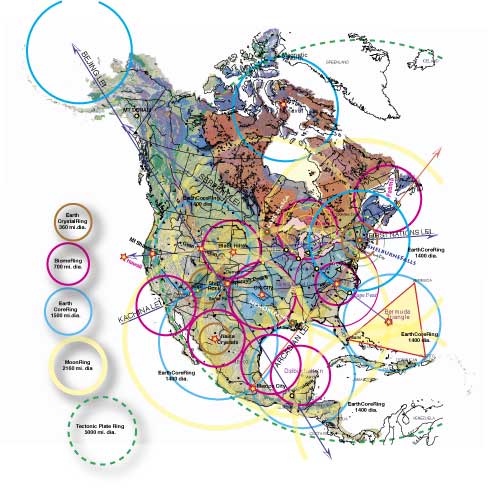 Click this link to get a Massive 23 megs High resolution Map
http://www.geometryofplace.com/GM2010rings.pdf

MEGALITHS AROUND THE WORLD BUILT ON LEY LINES

Ok do you have the idea what ley lines are now? Well thompson park sets on one of these geometric lines running down the whole length of dryhill and intersecting with the park, The Vortex is a lower chakra focal point.

Remember Ley Lines and Planetary lines are connected.
This means Earth Quakes.
I found these charts that correlates to the lines and shows the connection to earth quakes .
On a 188 day cycle or half year  due to the Influx of our Sun and Binary "Nibiru" These alignments that are Magnetic .
This is all due to the Position of the Solar system Sun and planets including Earth in conjunction with the Galactic center.
My Blog on the Galactic center is listed a few time on here and will be listed at the end also.


These charts are created by the law and order of Creation "flower of life to Tree of Life"  Known as Expansion or Quantum Generation  Or One of the basic Sacred Geometric patterns and mathematical equation of Fibonacci sequence which is also talked about in My Galactic center blog. 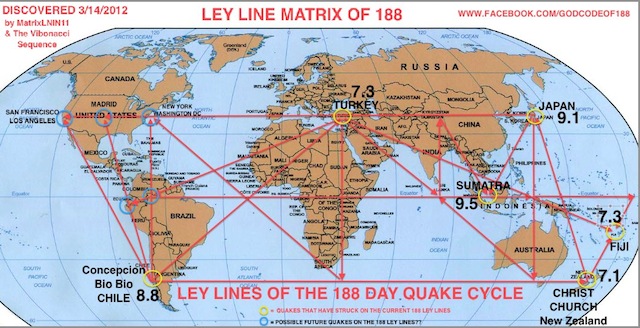 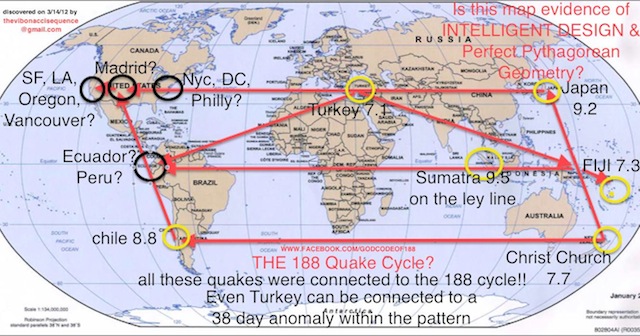 The Seven Chakra Locations of the Earth

Here is Another Video with Great Information

These are the major Earth chakras or energy points of Mother earth "Gia"
Remember as the earth is alive, she is a entity that allowed Humans to live on.
Her seas are alive,the skies,and the mountains also.  She Even sheds blood  sometimes in her "Volcanoes" with  magma. And even Abiotic Oil and gas that can be said is Her Essence.

More on the Major elements of the Earth this would be considered her alive parts.

Air,Fire,Earth,Water and the much later Metaphysical "Essence"
Which I will only mention for Reference sake
http://en.wikipedia.org/wiki/Classical_element

Now realize these Four building blocks and the Sacred geometrical shapes they Represent?
Everything in Reality remember is built on the basic concepts of This ancient Math mathematical shapes and patterns.

While Man and Earth do have many the same characteristics but not the same structure these patterns change or the circuitry behind them your could say,Both with chakra systems but not the same network sbape pattern that connects them but because of the Silcone structure of this Reality and Galaxy ever living energy takes on the Merkabah energy vessel that breaks down into Fractal Prisom energy which can be a whole different subject but this builds the characteristics of Living energy in a higher form from the soon to be 5th dimensional Plane, Read my Galactic Center Earth Changes  Dec 21,2012 blog to Understand that Point of Zero in time or the Reset of Earth . 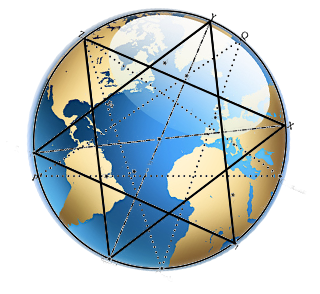 Does the picture look familiar ?
Its the star tetrahedron and looks Identical to the soon to be human evolution of a 2 strand double helix to a complicated 12 strand tetrahedron.
While We are the much smaller fractal of Mother "Gia"
Remember while the Earth has 10 Major Vorticies so does the body.

Continue on to my other blog where I will explain the ancient Chakra system in the body and the Merkabah Energy Field.

Earth Changes  Age of Aquaris And the Galactic center


Come back soon work in progress...

Posted by Starseed Bob-Prophecy at 12:24 PM

Starseed Bob-Prophecy
A Royal Indigo Starseed lightworker , a Patron of Many Houses.The Gate Keeper,A facilitator and ambassador that is here on my mission of Earth Changes and Enlightenment of the truth. Member of the Galactic federation of light.Nibiruan Council. Everything I talk on will be connected. The truth has a vibration that can be felt deep down inside and it will resonate in your subconsciousness until finally penetrating deep within. I AM HERE FOR YOU! Maitreya The Buddha